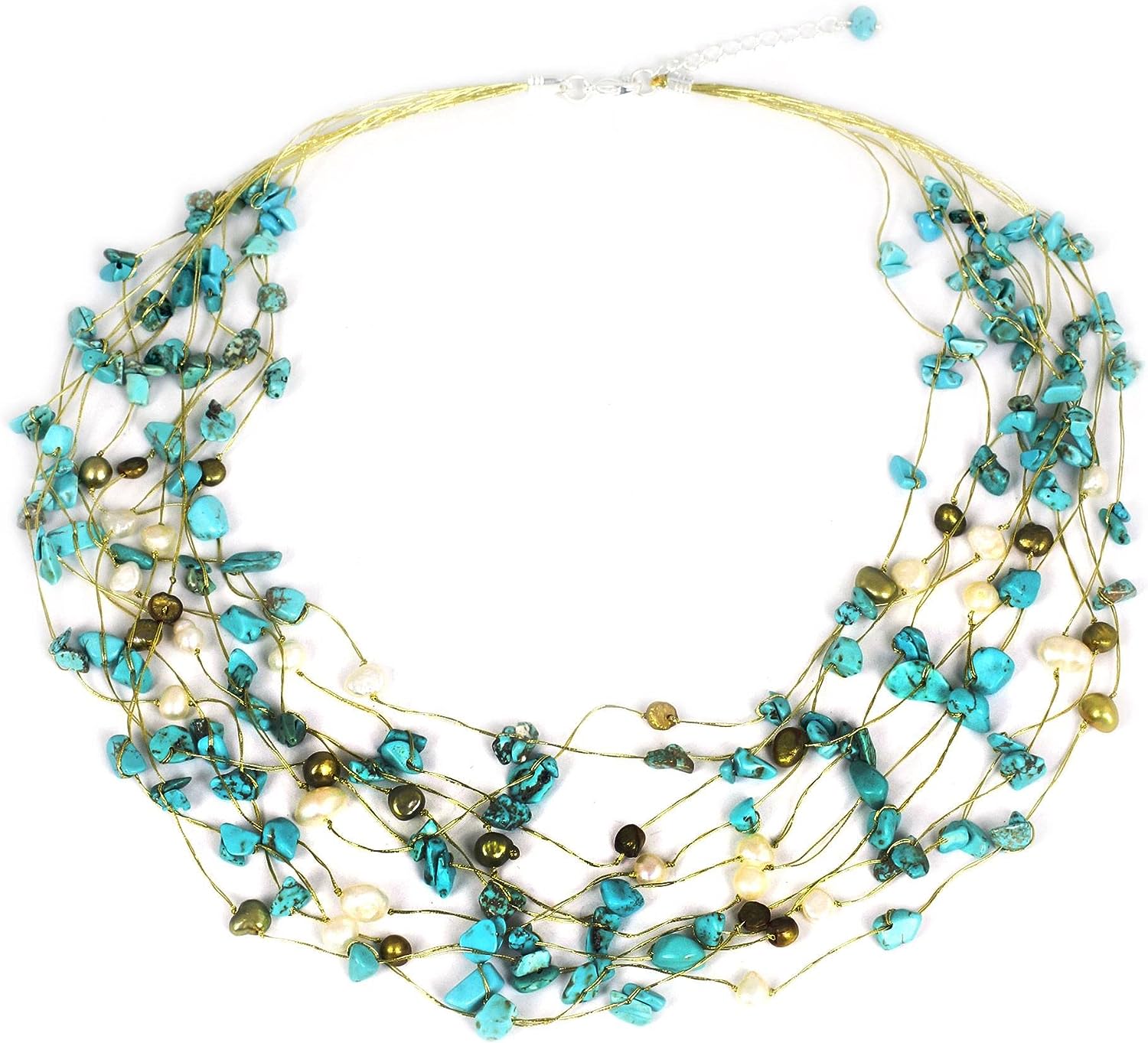 Pearl mingles with blue magnesite in an opulent design by Nareerat. "I think about the cool rain," she says. The concept takes shape in a handcrafted necklace as she knots each gemstone on strands of silk. Lobster claw clasp makes the necklace long lasting and durable. A lightweighted, easy to carry necklace on your multiple attires.

This delicate piece jewelry piece is a perfect option to wear in functions and parties. Can be used as gift to your loved ones.Makes the perfect wife, Birthday, Mother's Day, Bride gift.You can show anyone you love them with this beautiful piece of jewelry.

Your Packages are Safe and Secure!

Meet The Artist Behind The Masterpiece

To create my jewelry, I like to sit in the middle of the materials â colorful stones and pearls in many shapes. Nature is a reference for my designs.

I have opened a small workshop to create handmade jewelry made of gemstones, pearls, glass and many other materials. My work most emphasizes the beauty of nature and colors. There are four skilled artisans who have work regularly with me for a long time and everyone loves what they do.

The Women's Empowerment badge is awarded to female artisans or artisan groups that are led by women.

This artist positively impacts their community through job creation and provides jobs for 2 or more people.

This artist has dramatically improved their livelihood by working with NOVICA

Nareerat is educating her three children. Her twins are now in secondary school.

Myths and truths of a country on the way down, viewed through a deep-focus lens trained on the city from the deserts on the east; a terminus of unoccupied residential…

At the invitation of KPM Music, Six Organs of Admittance wizard Ben Chasny stepped behind his acoustic to produce a pristine new set of guitar instrumentals. Is it library music, or deeply personal essays on a formative instrument? Under Ben's fingers we hear it both ways and beyond: The Intimate Landscape is simply beautiful music that spans beyond the limits of folk, ambient and soundtrack music.

Artists in this story: Ben Chasny

Ty Segall’s new album Harmonizer is a synthtastic production redesign and makes for some of his cleanest songs and starkest ideas to date. Bringing together booming drum machines and corrosive guitars, “the wonder of sound is baked into the album from the title down, be it twin leads or the multi-part vocal harmonies that coat every song” (Brooklyn Vegan). After surprise releasing the album last month via Drag City (the physical release is set for October) and sharing the video for “Feel Good,”... END_OF_DOCUMENT_TOKEN_TO_BE_REPLACED

Artists in this story: Ty Segall

Looking at history the wrong way round through the telescope, objects may appear closer than they actually were! Yeah, life's a Rashomon even in reverse. Sometimes you have to take the long view - or in this case, the Far View, which compiles tracks from Joel Vandroogenbroeck’s legendary Coloursound library music series — a uniquely trippy catalog of sonic vignettes, freshly remastered from the original analog reels and long overdue for their day in the library music sun!

The late Joel Vandroogenbroeck was among... END_OF_DOCUMENT_TOKEN_TO_BE_REPLACED

Artists in this story: Joel Vandroogenbroeck

Regretfully, Matt Sweeney and Bonnie 'Prince' Billy will be rescheduling most of their upcoming Fall tour with Jonathan Richman. With the ever-evolving situation due to COVID-19 and having been through lockdown before, out of an abundance of caution we want to be preemptive for the safety of the performers, crew and audience. Some of the shows cannot be rescheduled due to conflicts beyond our control, but Superwolves are working hard to ensure they will perform at each city when it is safe to do so. Here's to... END_OF_DOCUMENT_TOKEN_TO_BE_REPLACED